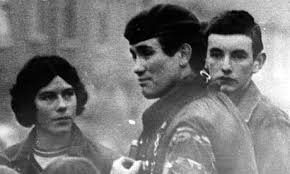 This is one of the strangest and most chilling topics I have ever investigated.

Robert Nairac was a senior British soldier who served in Northern Ireland during the early-mid 70s, one of the worst and most bloody times of the Troubles. Nairac had wanted to serve in Northern Ireland at a time when any sane soldier wanted out. From the beginning to the weird end of his military career he was an enigma. Everyone I spoke to said that he was charismatic and brilliant, and they immediately knew he’d go down in history. His military comrades also never forgot him yet to a man they all told me they never knew for sure who he was working for.

He really was, as the title to my article states, something of a ‘Shadow Man’ straight out of  a Le Carre spy thriller.

This article is far from definitive but it does uncover some new material. I took time to follow in his footsteps – including accurately charting the physical and chronological final journey to his death; I traced and met his SAS Commanding Officers (although Nairac wasn’t officially in the SAS…); I also tracked down and interviewed his schoolmates and Oxford pals (who recall him keeping a hawk in his bedroom); and finally I unearthed and interviewed former spies who allege Nairac was a… Triple-Agent.

Nairac was called the ‘Lawrence of Arabia’ of Northern ireland and some years ago I had this story optioned for a Hollywood movie. Alas, the film wasn’t made and now the rights have reverted back to me. I have never stopped investigating the case and indeed only a few months ago revisited the actual muddy field where I was told Nairac was executed. Yet, I still have questions about Nairac – so if anyone reading this wants to get in touch, please do. (Except a strange female character called ‘Nel Lister’ – a fabricated identity – who has caused mayhem down the years with anyone such as lawyers, MPs and yes, journalists, who examine the Nairac case: If she’s reading this, then I say: ‘Please don’t waste your time, I’ll spot you coming a mile off like I did the last time…’)

As of 2010, Nairac’s body has never been found or returned to his loved ones; a man is about to go on trial in Ireland for the murder; and I await a call from a decent production company interested in collaborating in what would be a stunning documentary using the new material I have yet to reveal. Like I say, this is an exceptional and eerie story that haunts all who read it and takes you into the dark heart of the secret, blood-soaked ‘Dirty War’ which once raged in Northern Ireland.

6 thoughts on “Shadow Man: An Investigation into Robert Nairac”